ARCHAEOLOGY: Punic Tombs? Not only

Archaeology is the study of human activity through the recovery and analysis of material culture and not just the excavation of tombs and old structures.  There are very important archaeological sites in which not a single structure exist, but the material deposited over time in this specific area could give thorough insight on how our ancestors lived and behaved.  If such sites are disturbed prior to being scientifically studied by archaeologists and anthropologists, there is a risk of loosing completely very important data. At the symposium organised by Wirt iż-Żejtun in 2012, a team of researchers and archaeologists from the Superintendence of Cultural Heritage, presented a very interesting paper, The Żejtun Villa and its ancient landscape – three new archaeological discoveries (extract from the publication The Żejtun Roman Villa, Research, Conservation, Management).The authors claimed that “The area comprising Żejtun and its environs provides a good case study for understanding the various ways in which ancient communities used and transformed their natural environment.”  In this paper they presented and reported about the importance of three recent discoveries found at Tal-Barrani, at il-Ħotba and at Buleben. 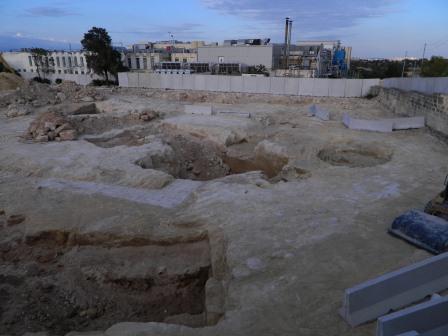 The cultural landscape, topography and documented and undocumented archaeological finds of Buleben and its environs hint towards the active use of this area not just in antiquity but also in medieval and early modern times.  One of the discoveries reported in the paper refereed to above included a number of tombs and a quarry which were uncovered following the clearance of a factory built in the 1960s to make way for the ACTAVIS extension.

When Wirt iż-Żejtun met the farmers in the area they gave important clues on the existence of further tombs in the area, some of which, as happened in other area of the Maltese countryside, were changed to cisterns to collect rain water which was used for irrigation. Unfortunately these cisterns are presently filled with water and it was not possible to investigate their form and shape.

If one has to study the topography and the landscape of this area, one can easily identify the fact that il-Bur ta’ Sufa is the highest point in the area at 52.5m above mean sea level and lest than 10m lower than the site on which the Żejtun Roman Villa is found.  This also coincides with the location of the Grand Master Perellos farm buildings which were also recently reported by Wirt iż-Żejtun. A visual superficial assessment around the fields at il-Bur ta’ Sufa  lead to the identification of some old foundations which have to be investigated further.

Oral information provided by these farmers and others, referred to the fact that most of the fields in the area were concentrated with sherds and sea-shells.  In fact one of the fields was referred to as tal-Qawwi as it was very difficult to plough with traditional agricultural implements, due to large concentrations of such deposits.  A farmhouse within this estate had a particular room which was referred to as il-kamra tal-fuħħar in which the ancestors of the current farmer used to collect all ceramic material gathered from their fields to crush it into broken pottery and used as deffun.  Since at the moment most of the fields have agricultural produce, a comprehensive assessment of the soil surface of these fields was not possible, however preliminary assessment has shown that sherds and broken sea-shells are still visible.

When asked about the sea-shells which used to be found in these fields, one of the farmers said that when he was a child he used to collect these shells from the soil and varnish them since they had a particular purple to redish colour.  He also showed us some samples of these shells which were gathered by his father’s uncle and used to decorate a shrine which he built in the farmhouse in 1913.  The shells which were shown to us were of the murex species. The secretion produced by these sea snails is a reddish-purple natural dye which was used by the Phoenicians for the dying of purpura which was considered as a very expensive material at that time.

The preliminary information gathered so far sheds light on the anthropological and archaeological importance of Buleben.  The name itself referring to the wealth of the produce which used to be gathered from these lands.  A thorough survey by a team of archaeologists has to be carried out during the summer months after the agricultural products are cropped in order assess better the superficial deposits in the soil.  This could then lead to a ground penetrating radar archaeological survey which can scan and bring to light what could be covered beneath the fertile soils of Buleben.