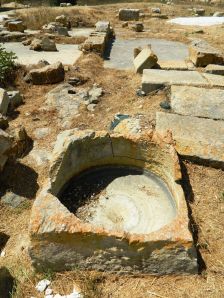 It has now been scientifically confirmed.  Viticulture  at Żejtun was present before olive oil production.

This year’s archaeological field study at the Żejtun Roman Villa by the students of the Department of Classical Studies and Archaeology of the University of Malta lead them to a very important discovery.  This discovery is the first of the sort in Malta and is important not only in the field of archaeological but also in the history of local agriculture.

In the past, archaeologists have been left in curiosity after in a number of sites, different form of what they called as ‘vine trenches’ were discovered after soil removal.  These consisted of various grids of trenches dug in rock.  Such trenches have been discovered in a number of localities, including also Gozo.  The latest network of such trenches was found at tal-Barrani in Żejtun, but at the site of the Roman Villa, during past archaeological investigations, similar trenches were discovered.

It was during this year’s archaeological field study that the trenches at the Żejtun Roman Villa were studied deeper.  One of these trenches gave a better insight to this unresolved agriculture practice.  It was found that this trench extended beneath the losange mosaic floor of the residential area of the villa which is dated to the Roman period.  Therefore for the first time in Maltese archaeology, these trenches were covered by material which is known to pertain to a particular period in history and thus one can clearly state that this agricultural practice pre-dates the Roman period.

But does this discovery change the history of Żejtun?  We have always been taught that the name of our town is derived from the name of the olive used for oil pressing, and the discovery of the Roman Villa in our town, confirmed what always have been thought.  Now archaeologists have found that before olive oil production, viticulture was already practiced in the same locality and on the same spot where olive oil was produced at a later date.  This confirms that land of Żejtun, through history was always fertile and rich in agriculture.  In fact,  research has confirmed that even under the early years of the British rule new agricultural produce was first tested at Żejtun such as potato and mulberry.