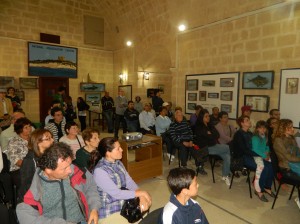 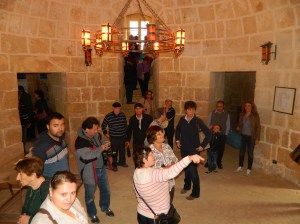 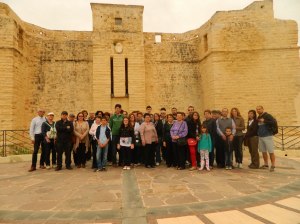 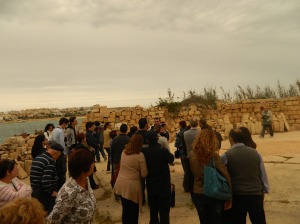 On Sunday 18th May, Wirt iż-Żejtun held another event as part of its activities to commemorate the 400th Year Anniversary from the Turkish Razzia of 1614.  This was consisted of a visit to a number of coastal fortifications found along the coast of south eastern Malta.

The first to be visited was St Lucian Tower which was built in 1610, four years before the razzia.  This tower was the reason why the Turkish fleet failed to land in Marsaxlokk Bay and instead sailed towards St Thomas Bay.  The tower had a number of additions in the British period and since 1988 was used as the National Aquaculture Centre.

Next to be visited was Mamo Tower, a small but architecturally very interesting private tower.  Today this tower is under the guardianship of Din l-Art Ħelwa.  Close to this tower we have noticed other private towers, all built in the latter half of the 17th Century.

St Thomas Tower was still under construction when the Turks on the 6th July 1614 landed few metres away along the coastline of St Thomas Bay.  This is the largest surviving tower from the six which were commissioned by Grand Master Alof Wignacourt during the first decades of the 17th Century.  The tower is currently vacant, however Fondazzjoni Wirt Artna is taking care of the building and soon will be entering into a guardianship deed.

The last to be visited was a small battery, or what remains from it, since part of it had collapsed into the sea.  This is Riħama Battery, which is the only one  which survives from the two batteries built by the Order in St Thomas Bay.  The other one was the Maħsel Battery which was built on the opposite side of the bay.  Riħama Battery is being managed by the Għaqda Bajja San Tumas.

The tour was attended by over 40 people, who notwithstanding the rather dull weather, enjoyed every moment of this cultural activity.  Wirt iż-Żejtun would like to thank the four organisations for granting us access to these historic buildings which once defended the residents of Zejtun from enemy and corsair attacks.