EVENTS: Valleys within the limits of Żejtun 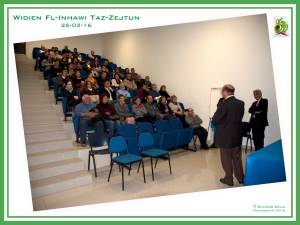 Today,  Wirt iż-Żejtun held an interesting talk about the valleys within the limits of Żejtun. This was the latest event in a series of activities intended to raise public awareness of what the south east of Malta has to offer in terms of cultural and environmental heritage. 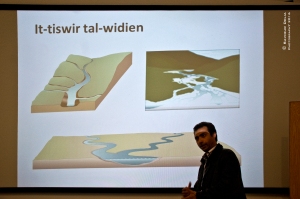 Żejtun on its slight incline, is surrounded by a number of valleys of great environmental importance.   Amongst these, there are Wied iż-Żrinġ, which  begins in Buleben and ends at the edge of Żejtun, namely at Ġebel San Martin, Wied iż-Żiju, which continues on to M’Scala, as well as Wied Ta’ Mazza, which flows from the edge of  Żejtun to Żabbar.  Close to the latter two valleys there is also the area known as Ħajt il-Wied, on the fringe of the medieval hamlet of Bisqallin, or what is commonly known today as Ir-Raħal t’Isfel. 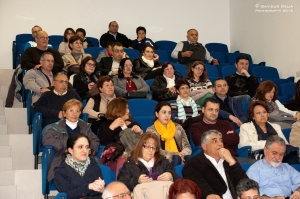 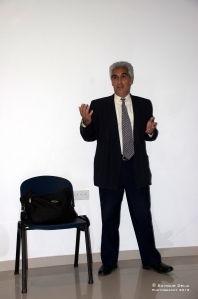 These and much more were the topics discussed by guest speakers, Ing. Simon Salafia and Mr. Alex Camilleri.  Mr Salafia, an electrical engineer by profession, who has Maltese history and culture at heart, especially the Medieval Period, spoke about the toponomy (the origin of the names) of the valleys mentioned above, whilst Mr. Camilleri discussed the environmental importance of said valleys.  Mr. Camilleri, who has worked for the last 22 years in environmental regulation, is also the author of various articles, which have been published both in Maltese and international academic publications dealing with the environment.

The talk was held at the lecture hall of the Family Park in M’Scala and was very well attended.

This entry was posted in Activities, Events, Uncategorized. Bookmark the permalink.