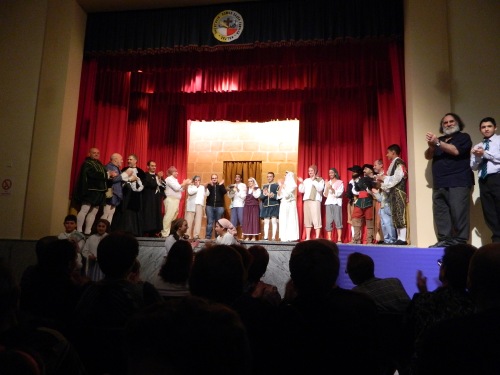 This drama was written and directed by Joseph Agius and was based on the historical event of the last Turkish raid of 1614, developing around a fictitious love story between Ġużeppi, an orphan youngster who was brought up by his grandfather after his parents died soon after he was born, and Magdalena, the female Jewish slave of Clement Tabone’s family, who had her own experience to recount.

Although just fourty nine years after the Great Siege of 1565, the youngsters at that time played fool on the older generation when the latter warned them about the risk that Malta could be attacked again by the Ottomans.  Ġużeppi gave little importance to his grandfather’s continuous words about this, until Clement Tabone himself warned him about the likeliness of Turkish assaults on the island.  It was only then that Ġużeppi decided to take lessons from Clement on how to the sword which his grandfather gave him on his eighteenth birthday.

Ġużeppi and Magdalena got married, and were expecting a baby, when on a Sunday morning they heard people shouting in the streets and soon knocking on their door.  The Turks had landed at St Thomas Bay and were on their way to the village.  The story had a very sad ending with Ġużeppi being captured as slave by the Ottomans after he went to defend Clement when the latter lost his sword at the battle in Buleben.

Both performances were very well attended and the audience praised all actors and writer of this drama.

This entry was posted in Events. Bookmark the permalink.