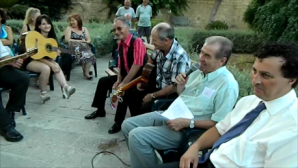 On Friday 6th July, Wirt iż-Żejtun organised an informative and entertaining evening at the Luqa Briffa historic garden.  This year’s activity had Maltese Għana (folk singing) as the main theme. Invited as mains speakers for this activity were Mr Charles Coleiro; who needs no introduction when discussing this subject, and the researcher Mr Steve Borg. 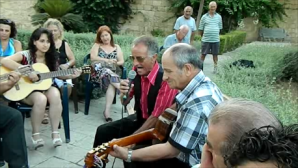 Mr. Coleiro described in detail the evolution of the Maltese Għana and explained the various forms and styles of local folk singing.  Examples of such styles and forms were given by għannejja (folk singers) from Zejtun who were also invited for the activity.  Mikiel Cumbo u Żeppi Spagnol accompanied by guitar players Gustu Zammit u Janice Spagnol started by singing a botta u risposta or as is commonly known għana spirtu pront (immediate reply). Janice also sang a similar piece with her father Żeppi.  The Mr. Coleiro explained what is meant by  l-għana la Bormliża, followed by a piece sang by Mikiel Cumbo.  Zeppi sang a piece from his għana tal-fatt (factual song) about the tragic traffic accident which occurred at Triq Anton Buttigieg  in 2009 after an explanation about such style by Charles Coleiro.   Janice then sang a piece known as għana tal-banju, usually sang by women during their cloth washing.

Mr. Steve Borg started his presentation by distinguishing through examples, the difference between tangible and intangible heritage.  Maltese folk singing falls under the latter section of heritage.  He than continued by taking those present around a number of south European countries and identifying what they are doing in order to save and promote their intangible heritage in particular to folk singing and folk musical instruments.  Steve was continuously questioning: “What are we doing to safeguard our folk singing?”.  He gave an overview of how he had identified a significant collection of original folksinging tape recordings dating from the Sixties and early Seventies. These have been acquired by the Friends of the National Archives, of which he is a committee member. Borg has also catalogued all the written data on the reels, which shall eventually form an integral part of a National Memory Project at the National Archives of Malta.  He then shared with those present a number of old photographs showing għannejja from Zejtun singing in different wine bars.  Those present also listened to old extracts of digitally converted of Maltese għana. 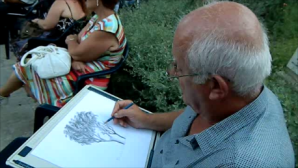 The Zejtun artist, Joe Baldacchino was also asked to participate in this activity by rendering the event through life painting, thus hinting the link between the local għana and art itself.

This activity was well attended not only by members from Wirt iż-Żejtun but also by people living outside Zejtun.  Interesting questions were raised by those present after the presentations.  The activity was concluded by refreshments.

We are grateful to the Zejtun Local Council who granted us access to this historic garden and to the Zejtun Parish for lending us the chairs and the amplifier.

Charles Seychell wrote this poem following his participation in our activity: