STREET SHRINES: The Statue of Daniel on Daniel’s House

On your way through the center of Zejtun there is a sizable palace in Misraħ Carlo Diacono which cannot be missed.  However most of those passing in front of this palace could easily pass by without noticing a niche located at the center of the facade of this palace.

This palace is know as Aedes Danielis which means “The house of Daniel” and is owned by the Testaferrata Bonici family.  The statue found in the niche is that of Daniel – Daniel the Prophet from the Old Testament.  It is quite rare to find a street shrine dedicated to a biblical figure from the Old Testament since most street shrines are dedicated to biblical figures from the New Testament and Saints.

The name of Daniel features a number of times in the Testaferrata Bonici family tree.  Girgor Bonici’s grandfather and brother were both christened with this name.   The same name was used again in 1733, 1819 and 1880. 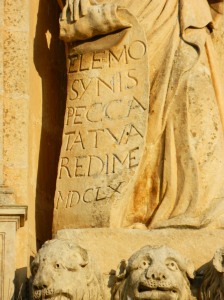 Girgor’s brother died in 1659 at a young age.  If we observe closely the statue of Daniel, one could note that the prophet is holding a scroll in his right hand and on it there is the inscription:  “ELEMO SYNIS PECCA TATVA REDIME MDCLX”, which means – Pay for your sins with charity – 1660.  Taking a closer look at the statue and in particular to his clothing and his face, one could first think that the clothing pertains to the Old Testament, however a button visible of his right hand indicates otherwise.  When studying his face and in particular comparing it with the face of Girgor Bonici found on a portrait forming part of the Parish’s Art Collection, one can see strong resemblance in the way the hair is kept and the mostach is trimmed.  Could it be that this statue was commissioned by Girgor in memory of his brother Daniel?

At the foot of the statue and beneath the niche on can see seven lions’ heads, again a strong link with the biblical account about the Prophet Daniel.   At the middle there is Bonici’s Family coat of arms with the Lily as their emblem.