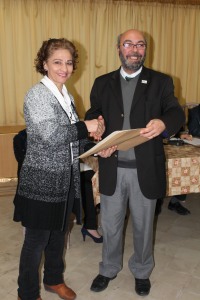 During the Annual General Meeting, Ms Maria Dolores Abela, the new Mayor of Żejtun was presented with an Honorary Membership in Wirt iż-Żejtun.

Mayor Abela was appointed as Mayor following the loss of  Mr Joe Attard, the previous Mayor.

A short remembrance in respect of Mr Attard, Mr Lino Psaila and Mr Joe Mifsud was observed during the meeting.

This entry was posted in Uncategorized. Bookmark the permalink.