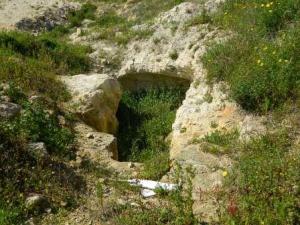 Just more than three years ago, when excavation works were underway for the building of a new hospital at the area known as tal-Ħotba off Tal-Barrani Road in the limits of Zejtun, a number of tombs were discovered by the archaeologists who were monitoring the works.

When the milk factory was built in the 1960s (the building which existed on site prior to the commencement of these works), two similar tombs were discovered and therefore when MEPA had issued the development permit for the excavation works, this was issued with a condition that such works had to be monitored by a qualified archaeologist. 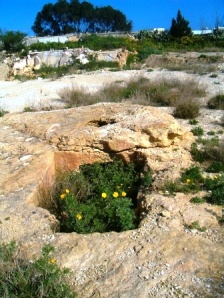 As soon as the tombs were re-discovered by the end of 2008, civil works were stopped and archaeologists under the supervision of the Superintendence for Cultural Heritage started studying the area.  During their archaeological excavations more tombs were discovered totaling to twelve in number.

According to a report on the Times of Malta (10th February 2009), “Most of the tombs, that could date as far back as 600 BC, were found damaged but the more recent finds have revealed intact structures. In some of them shards of human bone were also discovered.”

In the same report, Dr Joseph Cassar stated:  “A site like this should be protected. It is a necropolis. There seem to be 15 tombs in this particular site alone and there may be more.” 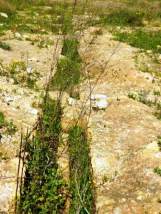 A total of 29 tombs have been found throughout the years between Żejtun and Tarxien.  An interesting aspect in this particular find is the discovery of vine trenches dug up around the tombs.  Whoever dug them up took great care in not disturbing the tombs, Dr Cassar said.

With the discovery of these trenches, the Bulebel site has unearthed a very rudimentary form of agricultural practice.  However, it is unclear whether they were built at the same time the tombs were hewn or whether they came later.  Although the report is claiming that the trenches discovered could be related to vine cultivation, further excavations which took place on a large track of land towards the east, revealed a network of such trenches, placed parallel to each other and almost at the same distance from each other.  One would say that due to this distance being approximately six to seven metres, the trenches could probably be related to the cultivation of trees, possibly olive trees.

We do share Dr Cassar’s appeal that this site should be protected from development and look forward to see the archaeologists’ reports following their excavations being published and disseminated for public knowledge.