EVENTS: The first landing place – the Eastern shores of the Island 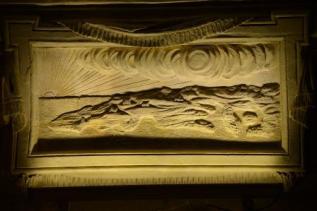 At dawn on Friday, the 18th May 1565, the first Turkish galleys appeared on the Eastern horizon.  The cannons of St. Elmo and St. Angelo were fired as a signal to Mdina and Gozo that the enemy had been sighted.  The people of the island started streaming into Mdina and Birgu for protection during the impending attack. By midday, on the next day, 3000 Turkish soldiers had already disembarked and were making their way to Zejtun, on the outskirts of which the first skirmish occurred.  This was the beginning of the Great Siege of 1565 and the Eastern shores of the island, the place where the Turks first made land 450 years ago.

These same Eastern shores, lit up by the rising sun, are depicted on a map carved in stone above the lintel of the main door of the Convent of the Daughters of the Sacred Heart in St. Lucian Street in Żejtun, a building which at one time served as one of the first schools in Żejtun.  As one of the events planned for the commemoration of the Great Siege of 1565 and continuing in its commitment to enhance and promote the cultural heritage of Żejtun, Wirt iż-Żejtun  has commissioned the restoration of this unique artefact.  The conservation and restoration exercise was undertaken by professional restorer, Jane Marie Vella.  The work, which included the cleaning, consolidation and restoration of missing parts of the map, was carried out during the month of April 2015.  Dr. Owen Bonnici, Minister for Justice, Culture and Local Councils, unveiled the restored map during a musico-literary evening on the 30th April, 2015.

This entry was posted in Activities, Events. Bookmark the permalink.